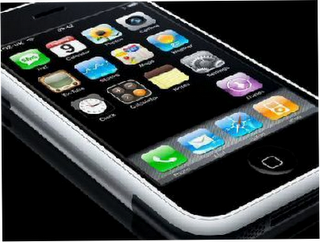 After standing in line for 8 hours to be one of the first to get the latest iPhone from Apple, I must say I was impressed with this device. It is far more than just a phone it also a great PDA and entertainment device. It has a great feel with the curved back and metal bezel framing a nice sized glass multi-touch display. This device gets attention just holding it. Everyone seems to want to touch it and comment about how light it feels while it is only hundredths of an ounce lighter than the previous iPhone for some reason everyone seems to think they feel lighter. It is comfortable to hold in your hand even for long periods of time like when watching movies. Overall I would say if you are switching from any other phone to an iPhone it is worth the wait.
If you already own an iPhone you can upgrade your firmware to the 2.0 version and get most of the features the new iPhone offers with the exception of the 3G high speed wireless and GPS options.
The iPhone is a platform more than just a phone. New software is being released every day through the AppStore to add functionality to the device. MySpace, Facebook, and Twitter are just a few of the Social Networking Tools that are available for free. Programs to help identify that song on the radio you like but don’t know the name of, the list of apps is already in the thousands and more developers and apps are being added every day to make the iPhone even more useful.
Now there are still some limitations of the iPhone. The lack of Multimedia Messaging Service (MMS) the ability to send video and photos over the Short Messaging Service (SMS) feature is kind of limiting. You can email a photograph to someone but you have to know their cell phones email address and not just the phone number. The camera still doesn’t support recording video, and the ability to Copy and Paste between apps is still missing. While the 3G is much faster and the WiFi connection faster yet the battery does tend to run down rather quickly requiring me to keep a charger by the bed, at my desk, and in the car so I don’t get caught with a dead phone/iPod. Part of the battery issue is the fact I use it all the time. I get my email instantly and can read it while I am listening to music or pause the video to check messages. When a phone call comes in my music or movie automatically pauses and takes me to the phone app so I can answer it.
The GPS with Google Maps and traffic information is a fantastic feature to help avoid congestion on the highways and to help you find stores and services you are looking for at the touch of a button. I am already discovering new restaurants and stores near my home I never knew were there because my phone just shows them to me.
iPhone has set the bar very high for cell phone manufacturers to make an all in one device that is fast, easy and makes a fashion statement. There will be a lot of imitations but I think it will be some time before anyone comes up with a device this good. At least until Apple comes out with the next one.