Using an iMac as a display for other Macs

There is a feature on modern Macs known as Target Display Mode (TDM). Users who have an iMac and a Macbook Pro and may want to use their iMac as a large external display can follow these few short steps to use the iMac as an external display.

First make sure your iMac and Macbook Pro supports Target Display Mode by checking the chart below and make sure you have the support cable type.

Plug your Macbook Pro into the iMac with a MiniDisplay cable to Thunderbolt cable and press ⌘-F2 on the display machines keyboard it will become a monitor for your laptop.

Note: Both machines must be on and you must have both computer on 10.6.1 or higher. The machine running in TDM will continue to run all programs in the background and will stay awake as long as it is in Target Display Mode.

To get out of target display mode press the ⌘-F2 keys again on the machine keyboard acting as a display.﻿

The camera, USB, Firewire, or other Thunderbolt devices are not available to the computer connecting in Target Display Mode. Just the display is accessed and used as an external monitor.
at August 27, 2013 No comments:


Something that has been missing from the iPad since the beginning has been the ability to send email to groups from the Mail app. There are a number of apps in the app store like MailShot or MailShot Pro that will help you create lists to send group emails from your iOS device.

However, with this quick tip I will show you a way to do it on your own.

1.) Create a new Contact with the name of the group you wish to have. You can do this in Contacts on your Mac, in Outlook on your PC, or on your iPhone directly.

2.) Under the new Contact Name you created enter the email addresses you want in your group in a single email field with a comma separating the addresses. For example email.1@domain.com, paultscott@gmail.com, email2@domain.org, email3@domain.net, and on through your entire list. 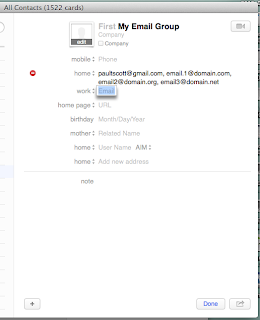 3.) Open your mail client and type in the group name you select. your recipients will all get the email. 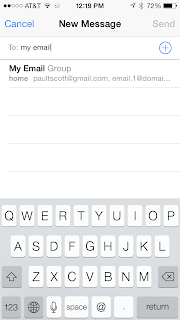 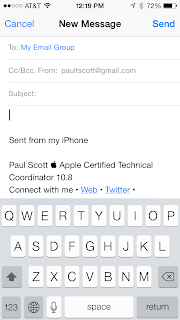 To ask Apple to add this as a formal feature please goto http://www.apple.com/feedback/ and ask apple to add group mail lists to iOS.

I have had a few weeks now to spend with my Fitbit flex and for those that know me I love these high tech pedometers. I started with the Nike+ shoes and app and have steadily upgraded as new devices have come to market.

The new Fitbit flex is smaller than its predecessors and slides inside a wrist band. No more forgetting to clip your Fitbit to your belt or put it in your pocket and virtually no chance of loosing it during the day. Wrist bands come in multiple colors and sizes plus are adjustable so users can make sure they get the color they like with a  comfortable fit.

The new Fitbit flex is water resistant and according to the company is ok it take it in the shower. I still take it off when I swim laps in the pool just in case it isn't truly that waterproof yet.

The Flex seems to suffer from a shorter battery life than its older cousins that are still for sale. Flex also now has a different charging cradle than previous models so if a user finds they have a dead battery on a trip they are out of luck unless users bring along the special charger.

Flex has dropped showing how many floors the user has climbed in the course of the day. That is a huge disappointment, I used to skip elevators so I could take the stairs to get my floor climbing count higher for the day. Once climbing 14 flights of stairs twice to get a 25 floors in a day badge.

All of these devices the Fitbit, Up, Nike Fuel, and others use a ramification element to keep the wearer engaged and make the device fun to wear and use. Also with historical tracking and a social aspect users can track what they did and compete against friends. Fitbit has also found the key to keeping people engaged also lies in integrating with other applications. Tying Fitbit into scale applications, blood pressure apps, diet applications so entering data in one place pulls everything together. Users can in the Fitbit dashboard see how many calories they consumed and how many they should burn. Allowing users to make better food and exercise choices. For me when I pay attention to these apps and log the food I eat I tend to loose weight and be healthier myself.

While wearing the Flex I have noticed I record more footsteps when wearing it on my non-dominate hand like the company recommends. While walking with a  Fitbit One and a Flex the Flex did read fewer footsteps over the course of a day.

I haven't been using it much lately since I lost the charger and have to order a replacement since every Fitbit I have ever had has a different charger. I still like the device and I like the social aspect. It encourages me to walk more.