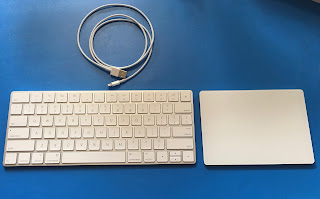 The keyboard with the new internal butterfly mechanism and larger key caps feels very nice to type on. Quick lightning charging and simplified paring makes it an excellent keyboard for daily use. It came nearly fully charged and I plugged it in for a few minutes to see the new auto pairing feature. Only time will tell how long internal battery will last but in four days I haven't seen the battery percentage drop at all yet.

Taking it out of the box and plugging it in to the computer with the lightning cable made the keyboard automatically pair with the computer making it even simpler to setup than going to Bluetooth and entering the six numbers that appear.

Well now just plug it in and it pairs and is ready to go. Then you can unplug it at your leisure. The thing some people may not like about the much thinner and smaller physical keyboard size is now like on the mobile computers the up and down arrow keys share a single key cap. Sorry gamers I know you won't be crazy about that. Even I am not a huge fan of it. Although now my laptop and desktop keyboards have the same approximate feel to them.

The TrackPad is a huge improvement. It has a much larger surface area and features Force Touch. Allow users to have left click, deeper left click, right click, and a whole host of gestures to make the desktop more useful. As developers start taking advantage of Force Touch I am sure we will see it more in desktop applications. It takes a little getting used to the Force Touch feature as I occasionally end up clicking too hard when trying to drag a file somewhere and force touch instead of left click by accident. I am sure it is an adjustable setting. For now I am just trying to get used to lightly tapping on the trackpad to see if I get used to it before I start changing settings. I try to test out the defaults first to see how it works before I start customizing the experience.

Overall the new Magic Keyboard and Magic TrackPad has made my two year old iMac feel newer and give me access to all of the features of OS X 10.11 and I am sure as time goes on we will see more features take advantage of Force Touch.

Now the new Magic Keyboard is a price jump of about $20 to $99 and the Magic TrackPad increased in price from $69 to $129 a $50 price increase over the previous models. So far I have only replaced two of the three keyboards and trackpads I use given the price jump. However, I believe the devices are worth it given you will not be buying replacement batteries again and given how long the previous models lasted these new devices will likely last many years to come. So think of it as a long term investment in your technology and it is the piece of technology you touch as much as or more than your smart phone so it should feel good to use.
at October 21, 2015