Is AT&T Business Plan to give away all of their customers to the competition? 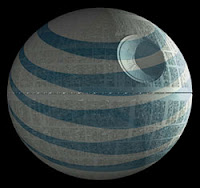 Well let’s be honest. iPhone owners really didn’t have unlimited Internet access to being with. In the small print AT&T Unlimited is really a 5 Gigabyte per month service. Last time I checked that was far from Unlimited but for most users they would never hit that limit.

Over the last seven months my average data usage was 266 MB and Mom’s average data usage is just 131 MB a month. Most of the time we are in the range of WiFi That isn’t a huge amount of data. To hear AT&T tell the story they are being overwhelmed with all of the data usage. If we had tethering which Apple started offering on iPhone last year I would optimistically say it would probably double my Internet usage to a whopping 532 MB for me and 262 GB for Mom. As a family that puts us under 1 GB of data a month. In a recent Mac Observer poll it seems as most iPhone poll respondents are 1GB or under per month in their data usage.

So AT&T wants to take the unlimited plan we currently pay $60.00 a month for data (2 iPhones) with a 200 MB plan for $30.00 a month ($15.00 per phone) or 2 GB for $50.00 a month ($25.00) per phone. While cutting our unlimited plan is annoying I could live with a small reduction in Internet prices for my phone but if I want to add tethering to our phones it will be another $20.00 per phone. So AT&T’s method of saving me money is really going to cost me an extra $40.00 a month. Not only can they not run a successful cellular network with a handset that virtually sells itself but basic math seems to escape them as well. I only save money if I use less of the service and forgo tethering we were promised over a year ago. News Flash AT&T I can save money from the power company by not turning the lights on too. That doesn’t mean I want to live in the dark. I should be able to use my service I pay for when I want to and not worry about overages.

So the press release that advertises lower priced data plans will actually cost me $30.00 a month more for 6 GB a month less data. How is this saving me money? Is AT&T trying to give away business to competition. Scott Bourne from Mac Break Weekly announced on his blog today he is giving up his iPhone and going to Droid. Not because he likes the Droid better but he just hates AT&T that much.

Listening to This Week In Tech with Leo Laporte or really any other tech show that talks about the iPhone AT&T is always being dogged for poor network performance, poor voice quality, frequent dropped calls, and poor customer service. I defended AT&T for a time because I really liked my iPhone and in most areas I visited I had pretty good coverage but still many dropped calls.

Now AT&T just can’t be defended. It is time for Ralph de la Vega President and CEO of Mobility and Consumer Markets should be fired by his board. AT&T has totally failed to capitalize on one of the best handsets to be released in the US in the history of mobile communications by delaying MMS rollout, failing to build out the network faster to support the iPhone and working harder to make service better. AT&T is doing their best to destroy the Golden Eggs Apple has laid at their feet.

This announcement also came on the heels of AT&T announcing they are increasing cancelation fees from $175.00 to $325.00 for early contract termination. Nothing like a little indentured servitude to your cell provider to really make you resent them and look forward to the end of a contract and inform them where they can stick their “services”.

It is time that all AT&T customers and iPhone users publicly speak out against AT&T and let them know that while we iPhone lovers love our iPhones we will not tolerate a co-dependent relationship with an abusive provider.

Apple needs to step up and announce formally new carriers. A recent poll indicated 16% of Verizon’s 10 million plus subscribers would be interested in switching to the iPhone. How many users would love to move to TMobile with an iPhone? Better customer service and a family plan with unlimited talk, text, and web for $139.00. I would drop AT&T in a heartbeat and not have to think twice about it.

This cheaper data plan is solely designed to discourage users from using the network and increase revenue by creating overages when iPhone users use more data than they planned on. Also forcing us into a capped plan if we want to tether our phones. iPhone tethering has been a feature of the iPhone since 3.0 was released a year ago and is used by iPhone users the world over except for those on AT&T in the US.

According to iPhone Buzz one AT&T customer got a cease and desist order for emailing the company CEO twice. Of course we don’t know the content of that email was, undoubtedly it was complaining about AT&T business practices. Instead of reevaluating AT&T responded with lawyers. Way to serve your customers! How about giving back your salary to the company now as a favor to the share holders you seem so desperate to wipe out their investments in your company.

It is time AT&T stops holding Apple and customers back from using our devices the way we want to use them. It is time AT&T comes forward and announces how they plan to beef up the voice network and increase coverage while at the same time making their pricing more competitive with T-Mobile, Verizon, and Sprint. Perhaps AT&T has told us how they are going to accomplish the first task. Make is so inconvenient to use their customers will just go away and stop bothering them. As for the second part they don’t need to be competitively priced the competition is already cheaper so I guess they plan to give away more customers.

In the next couple of years as iPhone comes to other US carriers I think we will look back on this and say this was the day when AT&T CEO of Mobility and Consumer Markets Ralph de la Vega doomed his company. Hopefully the AT&T board of directors will act on behalf of share holders and customers and turn this mess around before AT&T becomes the third rate carrier we always new they could be. Way to snatch defeat from the jaws of victory AT&T.
at June 03, 2010