The MacGuy visits a Microsoft Store

Much to the surprise and amusement to my readers I checked in on FourSquare from the Microsoft Store at the Mall of America stating I went into the store and didn’t burst into flames. For those of you who don’t know me personally but read my writing here and in Apple Spotlight Magazine and listen to the TechBits podcast may not know is that your friendly neighborhood Apple Certified Support Professional and other affiliations is a mild mannered Support Engineer by day supporting both Mac and PC and my alter ego is the MacGuy writer, podcaster, and general Apple fanboy by night. It is sort of like being a super hero without the cape. 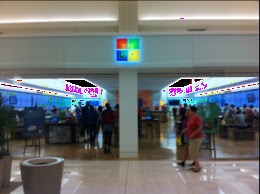 We have all heard the news about Microsoft’s 11 Retail Stores and the stories about 45 more coming in the next year across the US except for Alaska. Well, on a recent trip to Minneapolis I decided to visit the Mall of America to visit the Microsoft Store and its arch rival the Apple Store just across the hall.

The look of the two stores is very similar downtown the liberal use of white walls and generous lighting and light wood tables. Microsoft does throw in some splashes of orange and video monitors that wrap around the store instead of putting up ad banners. The MS store employees where red shirts to the Apple Store employees use of blue. Apparently the Microsoft Store designers never watched Star Trek. 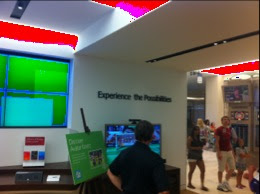 I did notice in the hour I was there no one walked out with any snazzy new Microsoft gear. In fact the employees seemed a tad distant and didn’t talk to me unless I approached them and asked questions. Since Microsoft doesn’t sell much hardware except for the Xbox and keyboards and mice the store is loaded with Sony, Dell, Asus, and a few off brand looking machines. The store was adorned with four Microsoft Surface tables. Not for sale that I could tell and not as impressive in real life as in the videos. 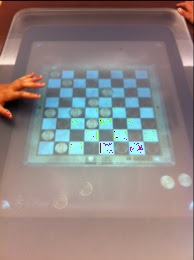 Overall it was a poor imitation of the Apple Store experience. Although lots of Xbox’s and Connect systems scattered through the store provided hours of entertainment to kids of all ages. I supposed it is cheaper than the arcade around the corner.

A Microsoft store employee who spoke to me on condition on anonymity confided in me when I asked about the striking similarities between themselves and store across the hall stated “We like to take something that obviously works well and improve upon it.” Later in our conversation this employee pointed out something missing from the Microsoft Windows 7 computers stating the “Microsoft makes a deal with all vendors that put hardware in our stores. No bloatware is allowed on these computers. These machines only have Microsoft Windows software on them and Microsoft security software nothing extra.” I will note one of the Asus tablets that converts into a laptop they were showing did feel very sluggish when using it and the similar tablet right next to it for a few hundred more was a much better performer. Even in the Microsoft store they allowed under powered hardware in that makes their software look bad. Incidentally that under powered hardware was still more expensive than a Macbook Air which is much faster and more usable. 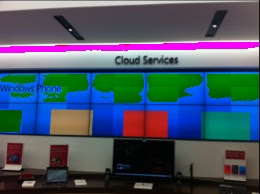 Nothing in the Microsoft store I looked at came close to the usability of the iPad, the elegance and speed of a MacBook Air and notably missing from the line up of tables of gear was a selection of Windows Phones. Maybe I missed that section of the store. There was a large window display reminiscent of the iPhone displays with a LCD monitor turned on its side showing video of what an iPhone can do. They had the Microsoft version in the front window of the store but I never noticed phones out to be touched or used. Also conspicuously missing was MP3 players. I guess Microsoft figures those will never catch on.

Finally putting the Microsoft store across the isle from an Apple Store and this was not an accident all of the 11 Microsoft Stores are in close proximity to an Apple Store. Just seems to highlight the deficiencies in Microsoft’s strategy. The one winning product they have the XBox is relegated to the back of the store and looks more like an arcade than a retail store. The employees aren’t engaged and don’t feel like they really believe in what they are doing. It seems as though Microsoft thinks if they make themselves look like the Apple Store that one of two things might happen. Either one they will confuse would be consumers into walking into the Microsoft Store instead of the Apple Store and selling them a computer. Or two if they make themselves look as much like Apple as possible somehow that will make them magically hip and competition for Apple.

The problem is the PC industry engaged in a race to the bottom on price and innovation suffered. Since Microsoft doesn’t control the hardware at all it makes it impossible for them to move in the direction they want to go. Apple can and does tie the hardware and the software together tightly to make a great experience. Something Microsoft does not have enough control over their vendors to accomplish.

In short after spending time their I have to agree with an analysis of the Microsoft Store by John C. Dvorak the Microsoft store is not a good idea. It seems as though Apple is the only one who has figured out how to make the experience work. Did any of you ever visit a Gateway Country Store? There is something going on in Apple that isn’t easily duplicated. Like typing the hardware and software together to create an experience the Apple Stores are more than just the decor, the computers, and the staff. There is something very carefully planned a secret sauce that has made these stores wildly successful in a way no other PC manufacturer has been able to duplicate. When the Apple Stores first opened It was universally accepted they would suffer the same fate as Gateway Country. However they have grown and flourished into one of the most profitable retail spaces on a per square foot basis. It is amazing.

For those wondering when I left the Microsoft Store I did walk straight over to the Apple Store to get a refill of that upbeat Apple energy and the force was in balance and all was right with the world again.
at August 05, 2011