The iShower from iDevices is probably one of the handiest devices I have ever reviewed. The first unit I tested was faulty and had to be replaced after a few weeks but iDevices RMAed it for me right away with no problem. In the few days I didn’t have my iShower it just wasn’t as much fun to take a shower. This device pairs with up to three devices over bluetooth and has a long range. It worked over 50 feet away from my phone and I got great sounding music. The iShower is water resistant, not water proof it can’t be submerged but it can hang in the shower or be placed pool side. The device can hang from a provided hook or be held by a fold out handle. Pairing the first device I found to be a little confusing but once I got it working the operation of the device was simple. 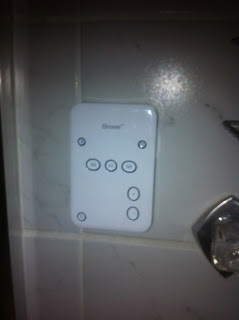 The iShower will display the time if the clock button is pressed or the volume adjusted so you won’t be late getting to work if you start rocking out to music in the shower. The buttons are large and easy to operate with play/pause, forward and back in the middle and the up down volume on the bottom right of the device. I leave my iPhone on the dock in the morning to continue charging and when I turn the shower on I press power on the iShower and play to start whatever music or podcast I was most recently listening to the night before.

The iShower runs on four AA type batteries and seems to have a relatively short battery life in my testing. After the first set of included batteries I switched over to rechargeable batteries. When a phone call is coming in the music will pause to alert you of an incoming call. The iShower doesn’t play the ring of the caller but if you happen to be close enough to your phone to answer it you can probably hear the ring anyway. As soon as the call goes to voicemail play back automatically resumes.

What could be added to make the iShower more useful and fun? First better battery life and possibly a rechargeable battery system to save on replacing batteries and by switching to non replaceable batteries remove one more point water could leak in. I think a microphone and Siri button would be useful as well for those that have voice activated smart phones. Being able to change playlists or artists while in the shower would be fantastic. Caller ID display would be nice on the display as well so you can decide if you want to jump out of the shower to grab that important call.

Overall the iShower from iDevices is a great device and I would recommend it to anyone who is a music lover and has a bluetooth device to play music. After my shower I can pause the music and pick up where I left off when I get in the car.

The iShower is $99 dollars and is available through http://www.ishowerin.com/ or from Amazon for $89 dollars.

Nothing starts the day better than rocking out to some tunes in the shower and showers make everyone an excellent singer.
at June 29, 2013